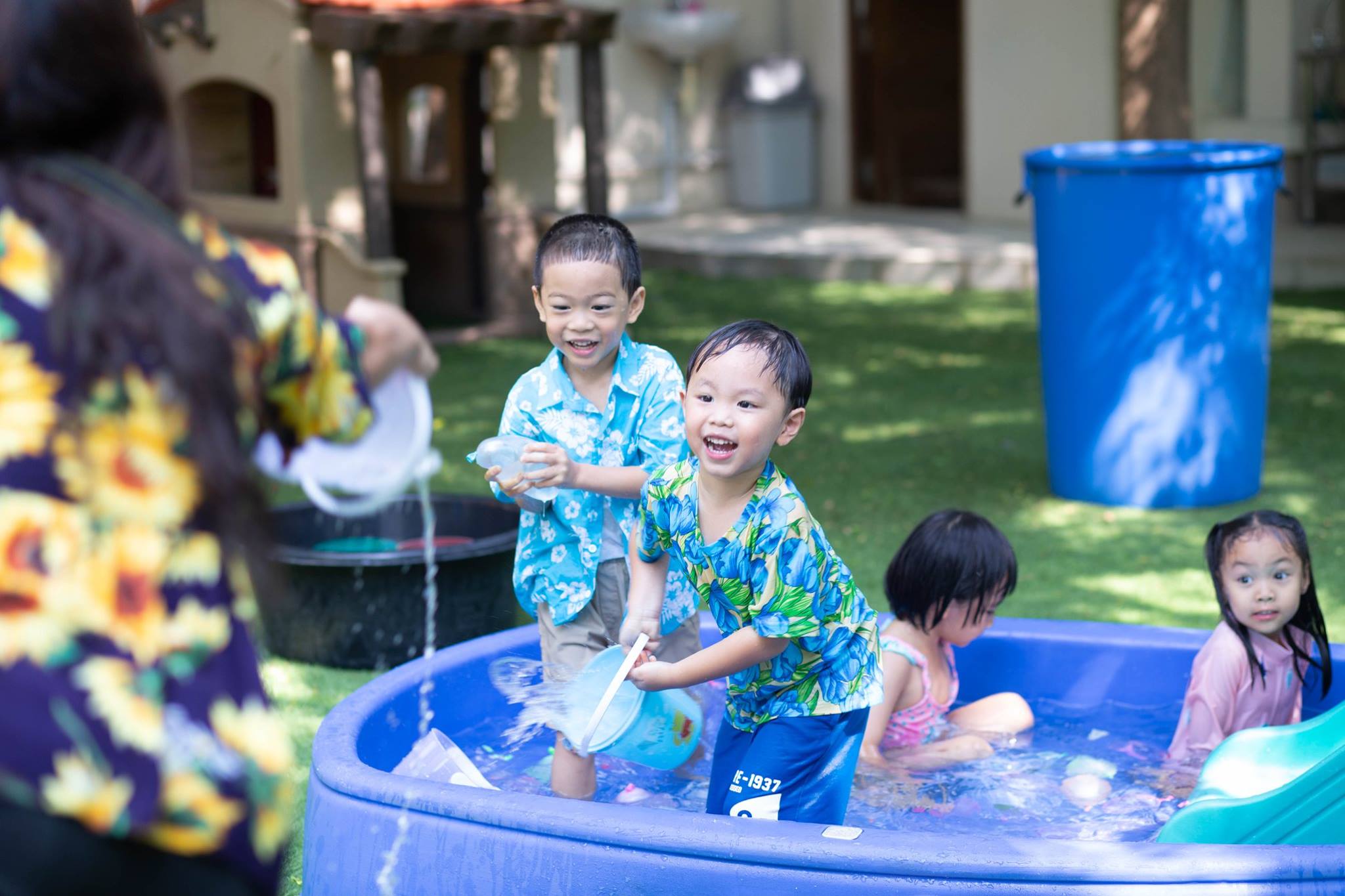 Songkran Festival is one of the most popular festivals in Thailand.

It marks the beginning of the Thai New Year, also known as the water festival.

For many of our students this week brought lots of joy and excitement.

Children have been counting number of sleeps till Thursday’s assembly.

They couldn’t wait for the moment to splash their teachers with a bucket full of water.

This week however wasn’t only about splashing water, it was also about creative learning.

Each class followed a theme related to water and flowers.

Nursery was learning about different types of boats such as sailing boats, yachts and catamarans.

K1 learned words like iceberg, waterfall and had lots of fun with ice chalk in the outdoor area.

They also transferred their sunflower plants near the school field.

K2 was investigating why some things float and the other ones sink.

On behalf of Hampton team I would like to wish you best of luck in Thai New Year. Happy Songkran!

This week in Nursery 2, our topic was “Boats”.

We learnt about different kinds of boats such as fishing boats, speedboats and boat houses.

The children were fascinated by boat houses and some of them even said they want to live in a boat house too!

We also learnt about parts of a boat such sail and an anchor and their functions.

Students were given a boat with a number on it and match it with the number of pirates.

We also went treasure hunting in the classroom.

We counted how many treasures Nursery could find.

In phonics, the children practiced using their listening ears to find items in the classroom that Mr. Sangtea described.

We also listened to sounds made by boats, waves and some water creatures.

Then we made the moves up and moved around the classroom according to the sound being played such as waving our arms side to side when we could hear the sound of waves.

In art, we used our fingers to paint waves whilst learning about the way they affect the safety and movements of boats.

The children also made their own boats out of egg cartons.

They were quite imaginative telling us that they will use their boat to go “look at sharks” or go hunting for treasure!

We hope you all have a nice holiday! Happy Songkran!

This week’s theme was ‘Water and Ice” which was perfectly flowing with Thursday’s assembly “Songkran-splash play”.

From Monday morning K1 kept on asking “Is it Songkran party yet?”

The excitement was growing throughout the week!

We learned about water cycle and how easily we can access it using taps.

They also mentioned that water is used in swimming pools, for washing faces or cleaning dirty clothes.

We also looked at the images representing lakes, waterfalls, streams and icebergs.

K1 found out that water can appear in three different forms: liquid, ice and gas.

We had lots of fun using ice chalks in the outdoor area.

It was hard to hold them as they were so cold, brrrr! But we loved the final, colourful effects.

In Maths we repeated an activity “Water, water” to practice comparing capacities.

We used different size/shape containers and pink water that looked like pink lemonade.

During Phonics we were looking at objects that begin with the sound /h/ and we revised a few other letter sounds that K1 is already familiar with.

We had a fun week in K2 with our topic ‘Floating & Sinking’!

Our Discovery Table gave the children opportunities to explore and investigate a variety of object and materials, sorting them into groups that float and those that don’t.

In Maths we revised 3D shapes, using the correct vocabulary to name and describe them.

We went on a ‘shape hunt’ around the classroom to see what 3D shapes we could find and talk about.

In Literacy, our phonic sound was /x/ and our focus words were six sixteen next box.

We practiced writing some sentences using these words – the children are really growing in confidence with writing now and using a dictionary for the tricky words.

In Art, we created a treasure map (‘X’ marks the spot!) which also helped the children to practice the vocabulary of giving directions.

We also had plenty of healthy exercise, playing fun games in the Gym using our parachute!